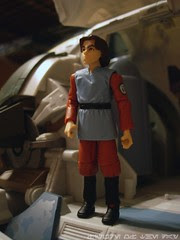 Bio: Ever since the Battle of Geonosis, young Boba Fett has made it his mission to confront the Jedi who defeated his father. Jango's son doesn't care that the duel between his father and Mace Windu was a fair battle between skilled warriors; Boba wants his chance to fight the Jedi. (Taken from the figure's packaging.)

Commentary: This particular Boba Fett is exclusive to the boxed set, which also includes 2 vehicles and 4 more figures. Even more surprisingly, it seems to be selling well, having sold through in numerous markets despite a high price tag. While not as decked out as his individually carded counterpart, this completely different sculpt is modeled after the Clone Cadet outfit, meaning that as of yet he's the only Clone Cadet action figure. While super-articulated, the shirt hangs down below the waist, blocking the hips from moving too much. The hands are sculpted nicely, but no guns were included for him to use in this set. You'll like this figure, I don't doubt, but I wouldn't suggest buying the set just for him-- for the vehicles, sure. For Bossk? Maybe. But not just for Boba, just because it wouldn't stun me to see a Clone Cadet sold elsewhere in the future and you could probably do a head swap with a different Boba Fett figure.

Collector's Notes: You'll want the Slave I anyway, so get this set if you can. As of now there are no known plans to sell this figure individually, but another carded version of animated Boba Fett exists. The set seems to still be available in most markets, and the sum of its parts are arguably worth it.