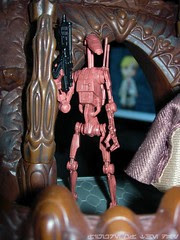 Commentary: As one of two new Battle Droid figures to debut in the Arena collection at Target, it's worth noting that both had wonderful sculpts and engineering with terrible deco. Articulation is good, but if you paint a figure badly it's almost worse than not having any arm joints. Thankfully this figure wasn't totally ruined, but Hasbro did forget to give him eyes. Rather than sculpt a place for eyes to go, they were just left painted on and for some reason the factory left them off. (On the companion Commander figure, the eyes were oversized.) The red plastic looked good, as did the black wash to bring out the detail in the figure. But the eyes! You can't forget to add the eyes.

As to the sculpt? Excellent. You get a figure that can really collapse into a little huddled-up ball, and he has ankle joints plus a telescoping neck. The hip joints have limited lateral movement (an upgrade from "none") and the arms are designed so they can also go in and out a little bit. There are no swiveling elbows here, but the figure can still be positioned with both hands on his gun if you really try. Hasbro did a great job designing the figure, but there's just not getting past the fact that 100% of the Target Exclusive run had no eyes. That's just a bizarre thing and I guess the kind of thing you'll only see in a line that has passed 1,000 action figures... statistically, it's bound to happen eventually.

Collector's Notes: This figure (as well as a version with corrected eyes) appeared in Saga Legends in 2010 and 2011. Even more amazing, he's packaged with the commander in a set, which is a really remarkable deal.

No eyes to "too big eyes" to "still-slightly oversized eyes".

Also, the neck and upper arms are backwards. Funny how few folks have noticed that. The neck should be tilted back, not straight, another inaccuracy...if it matter.

Then there's the question of how red should they be compared to the film.