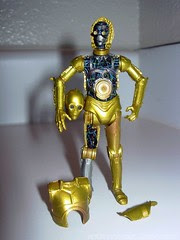 Commentary: Love it or hate it, there's no denying that this C-3PO is an incredibly interesting action figure. Dropping the vac-metal gold we've seen on most of the movie-based figures, this metallic gold protocol droid has a completely original sculpt that was, according to Hasbro, sculpted through mostly digital means. He's also super-articulated, which is unusual for C-3PO, and features numerous removable panels including one on his back that most people don't even realize is there. These panels do tend to pop off fairly easily, which means this is more of a figure for display than play. It's really cool to see all the wire detail, as this figure is clearly inspired by the prequel designs and delivers a unique, if not particularly "vintage"y action figure experience. While a little shorter than other C-3PO toys, this one is supposedly better in-scale with other figures including the new R2-D2, so you might want to get one (or more) for displays.

As a toy, it's merely OK. Hasbro adding in removable parts doesn't necessarily make it more fun overall, it's a nice plaything to mess with on its own but when you start putting it in vehicles you might accidentally knock part of his body loose, and that's arguably not a great play feature. (Maybe you like it, this is obviously something I don't know.) In the packaging it just looks spectacular, so I'd have a hard time not insisting that you go buy one of these. It's pretty great!

Collector's Notes: This figure seems to be a slower seller, but that's OK-- it means you should buy it next time it's on sale for less than eight bucks. Trust me, it's cool enough to be worth a look.

He reminds me a bit of one of those odd vintage Japanese 3po's. Like he should shoot missiles out of his chest.

I love this figure. Even though Hasbro admitted at some point that it turned out smaller than they'd planned, I love the sculpt so much that I had to buy two. And that was after months of being on the fence about it.

If Hasbro could figure out a way to make the same exact figure without the removable panels and slightly larger, they could reissue it indefinitely.

Also another great thing about this fig that you didn't mention is that most of the limbs are easily removable. I've got one of my 3POs displayed dismembered on Chewiee's back.

I... am not sure I realized that this figure had panels that came off? Huh. Was that apparent on the packaging? I'll have to take a look.