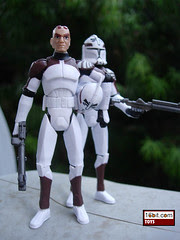 Bio: This clone trooper finds himself in a precarious situations that demands all his courage and stamina if he wants to keep himself alive until the next battle. (Taken from the figure's packaging.)

Commentary: Removable helmet Clone body + Commander Gree's repainted head = Boost. This figure was one of Plo Koon's men, and the deco on the armor is very similar to the Space Clone Trooper figure from early 2009, minus the space breathing gear. Really, all you get is a helmet and a blaster, but it's technically a new character so that's a plus. The double-mohawk of Gree is reused here with a new scar on his face, in an example of Hasbro imitating the Lucasfilm animators. To save on money, the animators reuse and repaint a number of assets, from bodies to heads to rooms, and it only makes sense that Hasbro should probably mimic this technique for the best in increasingly authentic figures. Why not reuse the same parts? It makes good sense.

Collector's Notes: This set came out later than expected, and the figure is presently exclusive to this set.

After seeing Dave Filoni's commentary about Plo Koon's clones being 'the Wolfpack', I was all excited to get these guys... and then I put them on the shelf and saw I had two or three already. They are virtually the same as the space troopers; so, shame on me for not knowing what I already owned.