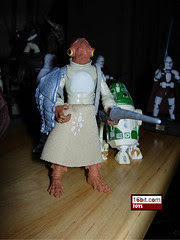 Bio: The Mon Calamari are under attack by the Quarren, who have joined the Separatist side in the Clone Wars. Aided by Republic forces, Mon Calamari warriors mounted on trained keelkana fight the attacking Quarrens in a roiling undersea battle. (Taken from the figure's cardback.)

Commentary: While I complain here a lot, the truth is I'm really easy to please. This Mon Calamari Warrior was something I saw on TV and immediately wanted, and here we are, just a few years later! How nice. The species had quite a few figures over the years, from Ackbar to Meena Tills, and now this fellow. The figure has pretty much everything he could have used on the show save for a giant eel to ride around on, plus he was lovingly rendered in that realistic style fans seem to prefer these days. (Although the truth is that fans want everything both ways most of the time, so I assume this is basically what the collective fanbase wanted. But it's what I wanted, so screw 'em.) The articulation is pretty great, the sculpt seems in line with the original alien design from Return of the Jedi, and you have an excess of accessories. We get so few undersea races of aliens that this one looks pretty sharp-- it's clean, sports a cloth lower section, and can be posed to look as if he may be swimming. It's a shame the legs weren't created to work with a mount, but they're not going to make a creature for him to ride anyway so who cares? It's great. The subtle sea-themed armor and bright lobstery skin are awesome, if you enjoyed the original Clone Wars micro-series you owe it to yourself to get this figure.

Collector's Notes: Only two cases shipped with this figure, both of which were basically at the same time in August of 2008. It seemed to sell well enough, but it didn't come back and any you see on shelves now are extremely old stock. I'd love to get more, so when you get bored with yours please send it to me and I'll give it a good home. No other Mon Calamari figures are known to be on deck, except for Nahdar Vebb. Which is shaping up to be awesome.