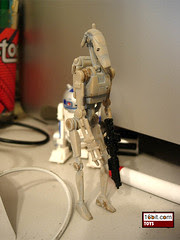 Commentary: For whatever reason, Hasbro decided that this Battle Droid mold was the top dog for repaints. As such, this figure with five points of articulation and removable limbs became the go-to figure for two-packs in 2007 and beyond. Starting life as a 2002 deluxe figure, it has now been given an exquisite paint job which, as of today, remains unmatched. The multiple colors of paint give it a weathered look that's pretty uncommon in any current toy line, and Hasbro really deserves kudos for doing a great job here. The parts are fully swappable with other droids that share the mold-- and there are many-- plus they're cheap cannon fodder. The person at Hasbro that decided two evil troopers for $7 was a good idea is a genius, because otherwise it'd be impossible to get an army of the buggers to pilot ships and fight the Clone armies we've all put together over the years. The sculpt is OK, nothing special, but the deco and the value make this set totally worth picking up-- in multiples, if possible. Hopefully Hasbro will apply this deco to its newer Battle Droid molds more in the future.

Collector's Notes: This figure was packaged together with a yellow Battle Droid Commander, similarly weathered. While new test shots of them have surfaced in late 2009, no known plans exist for a reissue just yet. Hasbro's 2005 Revenge of the Sith Battle Droid is colored similarly, but comes from a different mold.

Email ThisBlogThis!Share to TwitterShare to FacebookShare to Pinterest
Labels: Battle Droids, Droids, Revenge of the Sith, TAC, The Phantom Menace

I think the days of 2-pack battle droid are over, since these haven't appeared on newer Legends cards. Hasbro has the Target Arena pack molds with more articulation, and will likely single pack those instead.