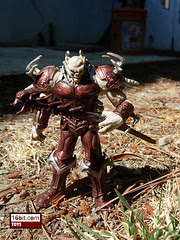 Commentary: Depending on your levels of fandom, you'll find this Yuuzhan Vong either the greatest thing ever or an abomination. A lot of old-timers either ignored or hated the Vong as their novels brought forth the death of Chewbacca, Anakin Solo, and the Force as an unbeatable... force. Fans of the books may be upset that this hulking berserker was based on a comic rather than the books directly, but that's what I like about it. This particular figure is one of the biggest Hasbro Star Wars figures, right up there with the likes of the giant Darktrooper but not of Graxol Kelvyyn. He's super-articulated, big, mean, ugly, and covered in that bio-armor you've read so much about. You can see what may be intended as little faces here and there on his suit, The deco is good, the paint is good, really the only thing this figure has going against it is that it looks a little un-Star Warsy.

If you like action figures as action figures-- not necessarily Star Wars-- this is a good one to get. It's big, impressive, and fun to futz with. It's rare you get an alien figure that looks quite so mean, nasty, and horrible, so this one is probably worth picking up.

Collector's Notes: One release so far, and it's been popular. Hopefully you got or are getting yours.

I took a look at it on flickr, that's a mean face right there.

I've never read the comic version, so all I have to go by are the descriptions from the printed books, but this looks pretty good. The armor sculpt looks less organic that I would have thought, especially the shoulder armor (it has legs and a tail, but it's etched like a bulkhead?).