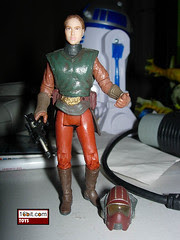 Bio: Senator Amidala, the former Queen of Naboo, returns to Coruscant to vote on the critical issue of creating an army of the Republic to assist the overwhelmed Jedi. As her Naboo Cruiser arrives, an explosion tears apart the ship. Fortunately, Padme, disguised as a Naboo pilot, eludes danger, but her decoy Corde, disguised as Senator Amidala, was not as lucky. (Taken from the figure's packaging.)

Commentary: She's a pilot! One of the great things about Star Wars is that they have the foresight to give the female lead something to do other than look hot and/or wear a dress, so this Padme Amidala figure is an honest-to-goodness action figure. She's a pilot, so you can put her in your Naboo Fighter. This means she has a removable helmet, too. Her blaster plugs into her belt, and the articulation is pretty good. She even has an exploding piece of scenery to simulate the assassination attempt. Really, this is one of Hasbro's finer figures in the Saga-era, because Hasbro hit it right on the nose.

The head sculpt is good, but the deco on the face is iffy. The rest of the costume is pretty much perfect, it's almost a shame there aren't too many more female pilots from Attack of the Clones to do because this one would be a great place to start several other figures. Ah well. As Padme figures go this is probably the best in terms of toy qualities, to snag her if you can.

Collector's Notes: Plans existed for her to be in a Kay-Bee exclusive gift set with a Naboo Fighter, but these were wisely put on hold when someone realized that putting out a figure that exists with a ship that exists is a pretty lame collectible item. Gift set, sure, but unless you're a sucker for package variant vehicles, it's a real drag. The figure was released just once, and the demand isn't what you might call big.

I would have totally fallen for the gift set. Love packaging design. Still looking for that Costco AT-TE.

I recall there being a female naboo pilot in tpm, but I guess it would be too much to ask for a fig of minimal interest. Anyone remember how long the ofee figs stayed peg warmers.