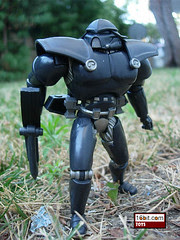 Bio: The dark troopers were advanced battle droids and infantry exoskeletons that featured heavy plating that resembled the armor of a stormtrooper, powerful weapons, and jumppacks for increased flexibility and tactical advantage. (Taken from Wookieepedia.)

Commentary: The biggest (and therefore best) build-a-droid from Hasbro's ongoing program is this massive Dark Trooper which towers over most other action figures in the line. While not an exact match of the game design, it's certainly cool enough and close enough to be worth tracking down. Each massive limb has at least two joints, plus there's a jointed waist, neck, and the usual spots. It kicks the butt of the 1998 release, which it certainly should given its higher price and the fact you have to re-buy figures you may already own to complete it. His unique stance and massive upper-body require extra support, so if you get one be sure to employ a display stand of some sort to keep him standing. The deco is good, the sculpt is nice, and he seems big enough to crush any of your usual Imperial action figures. Plus he's basically black, not silver like the previous release. What's not to like? (Aside from the price tag and Hasbro's making this figure hard to get, that is.) Someone is sure to want to army-build these, but this will likely remain cost-prohibitive for us mere mortals. Still, anyone can save up to afford at least one of this nifty figure and fans of the classic PC game should probably run out and do this.

And who knows, maybe some day Hasbro will make a Dark Forces-specific non-bearded Kyle Katarn to go with it.

Collector's Notes: It comes in five pieces with various Wal-Mart exclusive two-packs which, depending on your location, may have sold out incredibly quickly. Given that completing this item had an initial retail price just south of $100, the secondary market prices tend to be higher than that of other build-a-droids. It's worth getting for fans of the games, or robots, or Imperials. Really, you ought to get one of these.