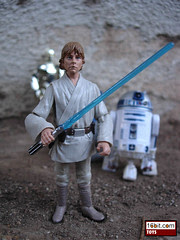 Bio: The young moisture farmer discovers his father was a Jedi Knight as circumstances lead him in a life-altering direction. (Taken from the figure's packaging.)

Commentary: This Luke Skywalker is, according to Hasbro, the best, the ultimate, with the best articulation and likeness ever. It's hard to deny this, although it seems the quality of the likeness is entirely dependent on the lighting. In other words, this figure certainly has the best-ever sculpt although it seems that the paint job doesn't do it too many favors-- perhaps it's the color, or the materials. In an overly bright store aisle or a too-bright shelf, it looks crappy. In a decent outdoor evening photo shoot, the figure takes on a new life and looks very striking. It really does benefit from a little bit of a shadow. It's hard to deny Hasbro's assertion that this is indeed the best-ever sculpt of Luke in this outfit.

The articulation is as good as you can expect-- 14 points, with ball-jointed shoulders, elbows, hips, knees, and ankles plus the ball head. The only thing this figure has going against him is he can't sit-- the plastic tunic bits hanging in front of his crotchial region prevent his legs from swinging forward, so you aren't going to be easily cramming this Luke in your Millennium Falcon or other dioramas. By incorporating the best overall elements from various Luke figures from 2004 and 2007, plus a new head, they pretty much perfected the character. Any new releases will probably be based on this one, hopefully if it ever sees any more changes, it will be designed so he can sit. Interestingly, the slit in the side of his costume allows for his legs to swing out, so the ball-jointed hips aren't totally wasted.

Finally, there's the deco-- Hasbro seems to be having some trouble here. The light grey tunic and the light tan legs look like nearly the same color, and most fans remember Luke as having a mostly white top and brown pants. If nothing else, we remember these garments as being different colors, not nearly identical as this figure makes them out to be. So, once again, Hasbro is just shy of nailing Luke, and while it's certainly one of their best, the coloring and its inability to sit in a Landspeeder make it so you shouldn't throw out all your older ones just yet.

Collector's Notes: Released late in 2009, it's unknown if this is going to be quite the stinker its ancestor was, as it has the exact same characters as the Training on the Falcon set. It's assumed this should be popular due to the high quality of these figures as opposed to the previous release, but will non-collectors care? And will Hasbro recolor Luke to look more like fans expect?

The likeness looks really great in your photo. This is a really nice battlepack as it includes definitive versions of Obi-Wan, C-3P0, and Luke, as well as the R2 with that many collectors were asking for. Hopefully Hasbro will continue putting "definitive" figures in their battlepacks instead of outdated POTF2 and POTJ repaints that no one wants. I know I'll buy more if they do.

Was so excited for this one, but it misses in frustrating ways. The legs are puny and make him look like a child, the shirt/skirt should be white, and the elbow articulation's still a little wonky.

Still, that head sculpt is just about perfect. That's where most previous Lukes fell down hard.

The legs do seem a little scrawny, but this is no deal-breaker for me. Thanks for hitting this one so soon after release. It is the best EP IV Luke ever produced.