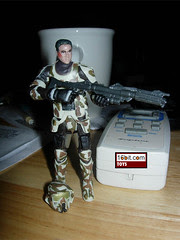 Bio: Quinlan Vos and Commander Faie are sent to Kashyyyk, the lush forest homeworld of the Wookiees, during the Clone Wars. The Jedi General and the clone commander have an uneasy relationship given their very different natures, and their ability to work together is made more precarious when the duplicitous Devaronian smuggler Vilmarh Grahrk appears and, predictably, stirs up plenty of trouble. (Taken from the figure's cardback.)

Commentary: One thing I find particularly enjoyable about the ongoing Star Wars line is that Hasbro seems to understand that we're totally cool with new Clone Troopers if they make some changes. This Commander Faie is one of few Clones to get multiple figures based on him, which is particularly striking given he's never appeared in a movie or on TV. The figure has a removable helmet rather than the flip-up Kashyyyk Trooper helmet, which is unique, plus he's got a big scar on his face. The figure uses the same body as the 2008 Kashyyyk Trooper, but it has different deco and, of course, a new head/helmet. It's worth getting all of 'em because they're different enough to look unique on a shelf or in a diorama, but those who are extremely cheap may not see value in both versions. These people are wrong.

Collector's Notes: This set comes and goes, since it comes with a really nice Quinlan Vos figure it's a set worth picking up. If you like the prequel toys at all, this is a good addition to your movie collection.

I've seen broken-into Star Wars figures before, but this version of Faie takes first prize. Of course, the thieves leave Quinlan Vos behind ... they just want Faie. You people suck.