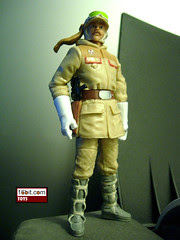 Bio: Major Bren Derlin has a tough call to make. With heroes Luke Skywalker and Han Solo stranded out in the frigid conditions on the ice planet Hoth, Derlin must side with caution and close the base doors for the night. He bravely takes responsibility for the decision and informs Princess Leia himself. (Taken from the figure's packaging.)

Commentary: Some figures exist because of some level of fame in fan circles, and Major Derlin seems to be one of these. He was written into the Return of the Jedi radio drama, but he's mostly known as being a tiny role for John Ratzenberger during the Battle of Hoth. Because people love Cheers and/or Pixar films, and fans are a vocal bunch, and Hasbro desired to release "trooper"-type figures with names, here he is! While not superb, he's pretty good-- certainly not awful. With eight points of articulation and a decent face sculpt, he's worth snagging just because of the novelty factor alone. Why not pick him up, really? The sculpt is going to fit right in with your Hoth display, he has a holster for his gun, and the outfit itself seems designed quite nicely. The figure isn't a stunner due to the swivel joints and his inability to sit easily, but hey-- this is a figure you pick up to say to people "did you know Cliff was in Star Wars, and that I've got the figure to prove it?" Worth getting if you like a good story behind your toys.

Collector's Notes: A repaint of this figure was sold as a Target exclusive in 2007. It was not called Derlin. No additional versions of Derlin have been sold.

Email ThisBlogThis!Share to TwitterShare to FacebookShare to Pinterest
Labels: Rebellion, The Empire Strikes Back, TSC

Can he be seated at the Cantina bar sections? That'd be where he'd look most at home: offering useless trivia and little known facts to the Snaggletooth and Hammerhead. If only there were a George Wendt action figure...