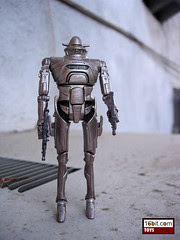 Bio: In the concept art from Ralph McQuarrie, the droid IG-88 has a broader shape than its ultimate appearance. The chrome war droid and bounty hunter still has a menacing presence with its simple lines that evoke its purpose: destruction. (Taken from the figure's packaging.)

Commentary: After a strong showing in 2007 with its McQuarrie Concept Figure program, Hasbro decided to do an encore in 2009 with IG-88. Unlike his forerunners, this figure doesn't have uniquely colored packaging that calls out why it's so special, it really just blends in with the rest of the line. (Which, if you ask me, is the wrong way to go. Anything you can do to call out figures as "special" is probably worth doing.)

The figure itself is pretty much perfect. He has twin holsters, 14 points of articulation, and just enough paint so that it's obvious Hasbro didn't cheap out. The added brown over the silver gives it a somewhat sketchy look, which is nice given that it comes from an old drawing. The range of motion for a bulky concept figure is remarkable, as Hasbro probably could have put out a statue and it would have sold just fine. Instead, this figure is easily as good as any of the best IG-88 toys made by the Rhode Island toymaker, although getting the head to move on my sample was a little tricky. The red eyes and silver body give the figure a decidedly retro look, and if you've been picking up the concept Boba Fetts and Stormtroopers and what have you, this should be next on your list. If you haven't picked up concept figures yet, this is a good place to start.

Collector's Notes: Along with Episode III concept-based Ki-Adi-Mundi and Anakin Skywalker plus a Joe Johnston Snowtrooper, this figure makes up the quartet of 2009 concept figures. IG-88 has the distinction of being the only McQuarrie design.

Once I have this and Willrow Hood my jets will be cooled for a while...

Special packaging is just scalper bait. I never saw the single carded McQuarrie Fett in a store, Chewbacca once, and the others very few times. I saw IG-88 three times within a month.

It's a nice figure, wish the IG lancer droid had been as solidly made.