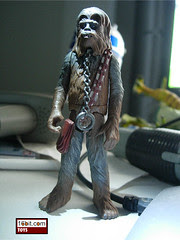 Bio: Chewbacca, acting as a prisoner, and Princess Leia, disguised as the bounty hunter Boussh, infiltrate Jabba's Palace. There they hope to rescue the carbonite-encased Han Solo. (Taken from the figure's packaging.)

Commentary: All things considered, this Chewbacca was a fairly crappy figure upon his release. The "thinner" body sculpt looked weak, he was cross-eyed, and the chain around his neck didn't look quite right. He could sit just fine, more or less, and had little problems standing. Unfortunately, the madded fur, shorter build, and awful head sculpt made him seem iffy in 1998 and by today's standards, this figure is worth not owning. If you're the kind of collector that buys acrylic cases or Star Cases for their figures, you're probably paying more to keep this figure pristine than it's actually worth. As a toy, it's acceptable, but the non-removable chain was a poor choice for a toy figure, and it just looks bad. Unless you light it right, which means keep it in the dark if at all possible.

Collector's Notes: This figure was never reissued. It was also somewhat tough to get upon his release in 1998, although time made him undesirable and cheaper-- the 2006 update didn't hurt either.