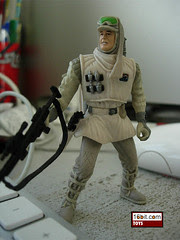 Bio: On the ice planet Hoth, the energy shield erected by the Rebels forced the Imperial Army to engage in a ground battle. The Rebel Soldiers dug into snowy trenches, blasting at the incoming Imperial Stormtroopers and the unstoppable Imperial walkers. When it became evident the base would fall to the enemy, the Hoth Troopers provided covering fire to give the Rebels time to evacuate personnel and equipment from the base. They fought fiercely, dedicated to the principal of freedom and willing to lay down their lives to win their objectives. (Taken from the figure's packaging.)

Commentary: Man this figure sucks. In 2004, there's really no excuse for a figure to be like this Hoth Trooper. Six points of articulation is one thing, but the goofy face sculpt, the awful pose, and the fact he's shorter than most non-Ewok figures is pretty much inexcusable. It has a little trouble standing, it doesn't look very good, the sculpt is merely adequate, but it arguably looks better than the 1997 edition as long as you don't have them side-by-side. Because this one is effectively a different scale. After getting the 2008 super-articulated Hoth trooper, few can compare, but this one doesn't seem like it's from the same decade. While most figures have some element of curiosity that makes them worth picking up despite more advanced releases, this is not one of them. For crowd filler, sure, why not. But as a figure for your collection, you can do much better.

Collector's Notes: A repaint of this figure was sold as a Target exclusive in 2007. It wasn't much better but it was packed with so many toys that it was arguably a decent deal, even if you threw it away. This particular figure would only see one major release.

I completely agree. What the hell was the Big H thinking when they made this small fry?