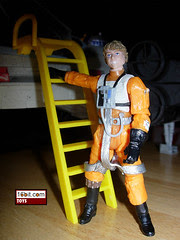 Bio: Luke Skywalker always dreamed of becoming an Imperial pilot, but he never imagined that he would one day sit in the cockpit of an X-Wing and battle the Galactic Empire. Luke becomes a hero when he fires the shot that destroys the Death Star battle station. (Taken from the figure's cardback.)

Commentary: It is a little-known fact that despite the large amount of complaints, Star Wars fans will generally always say that they want something. For example, this nifty Luke Skywalker figure was released after Hasbro decided it looked a little too goofy and went with a more subtle head on a 2008 release, but some combination of Hasbro wanting to get the most out of the tooling and fans saying that they wanted the grinning version of the pilot resulted in the item seeing production for Comic-Con 2009.

Basically, the reasons to buy this are twofold-- one, the ladder, and two, the head. Other than that it's essentially the same as the 2006 "Vintage" The Saga Collection action figure. It's super-articulated, can basically sit or stand just fine, and has acceptable deco. The helmet is missing key paint operations seen on other (and cheaper) releases, but if you buy this figure odds are you'll want to leave the helmet off to see the big, toothy grin. This figure is particularly notable in that his head seems much wider, and his mouth is open enough that there's a gap between his upper and lower teeth. The hair deco has two shades of brown (or blonde, whatever) which really does a nice job bringing it to life-- and his blue eyes are very true to the movie. With the slightly lower grade deco (note some missing black stripes on the brow, for example) and the new head, it looks more like a toy than a replica of the actor. It's a unique take on something that's been done time and again, so I like it enough to happily pick it up in San Diego last year.

While not everybody's cup of tea, this release is a pretty cool if you're a fan of the unusual, or if you can appreciate Hasbro making something truly strange that only the fans would ask for. It's not the best, but it's certainly the most distinctive looking take on the character in recent years.

Collector's Notes: This item was available at Comic-Con 2009 and also made it online afterward. This figure was originally slated to be part of the 2008 Wal-Mart Exclusive Droid Factory line. The ladder was also sold with the 2009 Target exclusive X-Wing Fighter with Wedge Antilles.