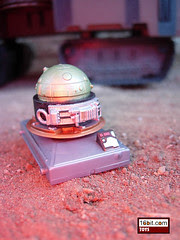 Commentary: At some point in the past few years Hasbro cranked out enough droids that fans started asking to do everything from the Sandcrawler scene, which is why we're getting a Jawa with a droid every year now. The most recent entry in the series was this Security Droid, a little guy that looks like a tiny quasi-astromech design with very little in the way of features. If you like how it looks, that's pretty much what you're going to get. The wheels turn, and the green "head" rotates a little bit. The deco is good, the articulation is as good as can be expected, and the sculpted detail isn't bad for a sidekick figure, particularly when you recall that these things were typically unpainted hunks of plastic in the late 1980s and early 1990s. This is a figure that hardcore droid fans need and the rest of the class will probably see as a nice, but not essential extra. I love droids and am glad to have this unique and different addition to my Jawa clan, but it's not particularly impressive. It's basically merely "fine," which is nothing to sneeze at, but collectors on a budget that aren't already sold on the companion Jawa may not particularly feel like shelling out for this one. (Although I will say that I basically dig it, even if it's just diorama fodder.)

Collector's Notes: This set has been selling fairly well, so get it when you can!