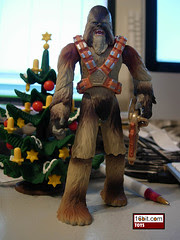 Bio: The Wookiees are intelligent, fiercely loyal and exceedingly strong. When their peaceful home planet of Kashyyyk is enveloped by the Clone Wars, these ferocious warriors fight the Separatist incursion. (Taken from the figure's cardback.)

Image: Adam Pawlus' desk. Note the native Kashyyyk flora, which is in no way a Playmobil Christmas Tree.

Commentary: This Wookiee Warrior was the second "generic" mold released in 2005, and this light brown color was the first of two releases-- a dark brown one shipped at roughly the same time but it seems this color hit first. The main downer of this figure, especially five years later, is the knee joints. Why Hasbro made them swivel instead of bend, I'll never know-- a stiff leg would have been pretty much just as good. I guess points for adding a point of articulation but there isn't one time since I first got this figure where I was particularly pleased that it had this kind of joint here. The arms are pretty good, even though the elbows are just swivel joints, plus the battle action from the waist joint works quite nicely.

The fur sculpting is good, the deco is just fine, and if Hasbro wanted to they could easily repaint this one again with a different pattern and color and pass it off as "new." It's decent enough to buy a few of, although the odd knees really do seem worse a few years on. Oh well! It's still worth picking up for your armies.

Collector's Notes: For whatever reason this figure was never reissued, but it's a nice one. A dark brown variant exists, as does a black repaint under the name "Wookiee Commando." Get 'em all, build your armies, etc.

I love Wookiees! Got a few of these figures, and lots of other Wookiees too, but I've never understood the knee joints on this one either. They make absolutely no sense, and add cost for no increase in poseability. Unless you like being able to pose your Wookiees with turned-in feet.

It's so they can do the Wookiee Shuffle!