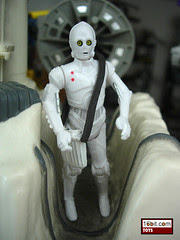 Bio: This protocol droid provides the Rebels with information on military tactics that he learned from his former owner Commander Narra. (Taken from the figure's package.)

Commentary: Since the Endor C-3PO was released in 2006, fans were hoping Hasbro would take it and repaint it into other robots. K-3PO is one of these. The same mold, complete with knee joints, is replicated here in white. It's an upgrade over the 2000 model, which was based on a TC-14 mold and didn't have jointed knees. He's also missing the blue splotches on the chest, but other than that is essentially the same, only slightly better. He can stand, sit, look at things, and pretty much do everything you'd want out of a protocol droid outside any meaningful arm movement. This mold has since been eclipsed by the stellar U-3PO build-a-droid body, but as a #2, it's perfectly acceptable for most robot needs. As diorama fodder, it's better than you'll need and it comes with enough other good figures to warrant purchase of the set. Grab one if you can!

Collector's Notes: This set has stopped shipping but you may still be able to find it in circulation. It's worth the retail asking price, given the five excellent figures.