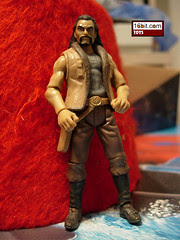 Commentary: Odds are you already bought this set for Thrawn, but if you didn't, it's worth noting that this Talon Karrde figure is well worth snagging-- if you're a fan of the character. One of the major introductions in the Zahn novels, this fellow is a big smuggler and Mara Jade's boss when we first meet her. On the bright side, this was pretty much perfect the first time-- all 14 points of articulation, a working holster, and on the whole everything holds together nicely. The head is probably the loosest joint, he has almost no problems sitting, his holster works fine, the paint is good, it's hard to fault this one. The fur lining of the vest is convincing, the boots and belt buckle all look right, plus they gave him a decent goatee. It's one of those figures that is hard to say much about because it's a new sculpt, the only version of the character as an action figure, and it's darned near perfect. I really can't think of much to say that would make this figure better, and my only quibble is that the holster gets in the way of the right hip from being able to sit a little bit. Well done, Hasbro!

Collector's Notes: He came and went pretty quickly, so if you missed this one you might want to start scrounging. This is a nice set. Since the comic packs are reportedly on the way out, I suggest you go back and get them all-- and make this one of the first sets you get if you missed it. Thrawn & Karrde are really one of the best examples of how the line worked well on a good day.

Went quickly? These packs lingered and are still around these parts.

He seemed a bit short and this jacket color matched his skin color too much.

That aside, he's decent for an EU character I don't care about. At least he's not another boring jedi.

This was one of the few comic packs I've been able to find at retail, and while I didn't really care much about the character, I think Hasbro nailed this one. He's a great figure, an interesting looking character, and a nice addition to the line. Frankly this guy is too high quality for the likes of a character like Talon Karrde, lol.