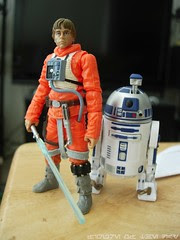 Commentary: This Luke Skywalker was unusual in a few ways, specifically how he was announced to the world-- as a completed, packaged sample since Hasbro actually had succeeded in manufacturing the entire wave before fans even knew it was coming. The production was seemingly held back for Toy Fair 2011, and the figures went online during the show and seemingly shipped from Hasbro days later. Well done, Hasbro.

This incarnation of Luke is based on a very specific few minutes of the movie where Luke takes his helmet and gloves off, so it's based on the 2009 (or early 2010) Legacy Collection Hoth Pilot mold with a new head and new hands. Rather than resculpt the entire arm, Hasbro made new hands with most of the sleeve connected, allowing them use of more of the existing mold and keeping costs down. (Smart!) The range of motion on this one is excellent, and he reminds me a lot of the playable Luke from Super Empire Strikes Back on the Super NES. He's armed and ready to do battle with, uh, snakes or something. The lightsaber fits on his belt, the blaster fits in a newly-sculpted holster, and basically everything about it is pretty darned cool. I'd also say that, in the right lighting, it's one of the best Mark Hamill likenesses we've seen from Hasbro in, uh, ever. It's really good, and the kind of plastic they used really makes it look even better. My only real criticism of the figure is that the orange plastic seems to show through the flesh-painted hands, so be careful to look at the hands when buying this figure.

It's by no means an essential figure, or even one you probably would've asked Hasbro to make. It is, however, totally cool and a lot of fun to play with. When I first got the wave, this was one of the first ones I cracked open-- and it's just wonderful. The articulation is great, he can get both hands on his lightsaber, and the only thing it's missing is a new Original Trilogy Yoda to pal around with. (The last new OT Yoda came out in 2004.)

Collector's Notes: As a new figure you might not have seen it yet. I've seen them around, and as of today a variant has surfaced-- a dark blue lightsaber exists as well as a pale, clearer blue. The pale, clearer one was the first release.

Other than online, WHERE have you seen this figure for sale?! All of the retailers in SE Massachusetts have been offering up the same 'ol peg warmers for months!

Wal-Marts, as recently as last weekend.

I've seen him at Target, TRU and Walmart, but I got my first one from Entertainment Earth

You just had to bring up Super ESB and make me want to buy this one. How awesome would a box set of repaints/retools for the SNES games be? I want some Jawas in a "flying through the air" pose like they just got blasted. Now I want to play the games, too.