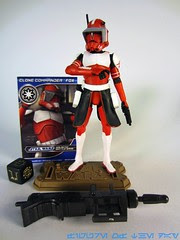 Bio: This awesome CLONE COMMANDER Fox figure is rendered in careful detail to look just like the character in the Star Wars: The Clone Wars animated series! Send him into missions to save the galaxy, armed with his blasters and firing missile launcher. Re-enact your favorite Star Wars battles or create brand new ones with this cool CLONE COMMANDER Fox figure!    (Taken from the figure's web site entry.)

Commentary: Originally Hasbro told us that we'd only see 19 Clone Wars figures carded in 2012, and we complained.  And shortly after Clone Commander Fox came out we discovered this was a lie-- there would only be 18 and that this would be the only new figure in his wave.   That doesn't happen much.  For those keeping track, only 11 new individually carded figures based on The Clone Wars made it out this year.   By comparison, 12 new figures were cranked out in August and September 2011 alone.   But anyway, Fox.

Fox is at best acceptable.   The figure's body is basically the new Captain Rex with 8 points of articulation, but with Cody's helmet and new deco.  While the new Rex had deco so amazingly good people mistook the damage paint job for actual damage or discoloration, the new Fox is not only squeaky-clean, but lacking when compared to the trading card included with the figure.  The tubes on the helmet have fine detail, the figure is a little less refined.  The damage and color variation on the torso was skipped in favor of a solid red torso, plus the chin on the helmet lacks the white box on the animation model and packaging.  I realize some of you may think I'm harping on the level of deco, but when a figure is a redeco, that's really the only thing you can get right or wrong, and this is a pretty lackluster effort.

Were this just a figure Hasbro made up and never appeared on the show, I would say it's fantastic.  It looks cool, I love the red, the two small blasters are great, and I'm sick of giant rocket-firing launchers that simply cannot be held by the figure due to gravity.   The sum of its parts are quite good, but when it comes from a TV show, authenticity counts for a lot.   This one needs some work.   Here's hoping he makes it back in 2013 with an altered paint job... hey, it worked for Chewbacca this year!

Collector's Notes: If you make it, and you make it hard to get, they will come.  Due to his being 2 per case in only 1 case in a year where distribution isn't all it could be, eBay prices are north of $25.  Which, I guess, isn't awful but The Clone Wars secondary prices have a habit of huge surges which last a really long time.  If you want this one, I suggest lots of hunting, or waiting out the market.

Totally lucked out and picked one up for $5 at TRU BOGO sale!