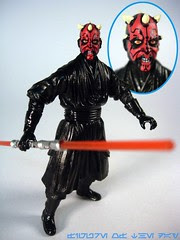 Bio: Qui-Gon Jinn and Obi-Wan Kenobi battle Darth Maul during the invasion of Naboo.  The two Jedi encounter the Sith Lord in the palace hangar and fight a fierce lightsaber duel that ends in the Theed Generator Complex.   Obi-Wan becomes separated from Quik-Gon by the complex's security shield, and can only watch as his Master continues the battle alone. But when the shield lowers once more, Obi-Wan attacks Maul with grief-stricken determination. (Taken from the figure's packaging.)

Commentary: You can't keep Darth Maul down, no matter how convoluted the plot gets.  In 2012, we saw a half-hearted attempt to really push the character into the forefront between the 3-D reissue of Phantom Menace and numerous new installments of The Clone Wars deciding that no, he isn't dead.  Just crazy.

This figure is arguably one of the better new 2012 takes of the Sith apprentice, although his lightsaber is strictly 1999. Even though the blade is old, the figure is entirely new and sculpted with a mere 5 points of articulation.  The shoulders, hips, and neck all move nicely and as such, he won't be doing any high-kicking or crazy combat poses.  He will, however, stand up with minimal fuss and look great doing it.  The head sculpt is sme of the better work Hasbro has done at this scale, and I daresay it exceeds every Maul in this size on the market today.  I know a lot of you are skipping it because of the lack of articulation, and while you're welcome to do so, you're missing one of the few really great sculpts on the market this year.

Collector's Notes:  This set hit in April but was basically impossible to find until several months later.  By September the set was pretty common at US Target stores, so keep your eyes peeled or order it online.