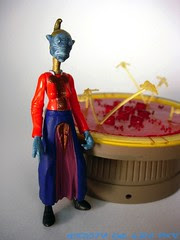 Commentary: There truly aren't enough Star Wars figures named after things I can order at local Japanese eateries.  Shu Mai was a new mold at the time of her release, bringing us a new alien figure and a woman, which is always highly unusual in this line.   While a colorful, well-designed figure, I can't say she's exciting.   She's pretty neat, though.

The prequel aliens may be no less inventive than their original trilogy ancestors, but they were certainly not fetishized or canonized to the extent of the creatures from 1977-1983.  Imaginations ran rampant over what a Hammerhead was and debate still continues to this day, while Shu Mai is and always was some sort of evil banker.  OK, head of the Commerce Guild.  It's still not interesting.  Thankfully the figure is pretty sharp, and her outfit appears more vibrant than the character in the movies.  With no real leg movement to speak of thanks to her dress, the figure's neck and arms are really your main points of movement.  There's a jointed waist too, but this isn't really an action figure so much as it is a diorma filler.  Heck, she even came with half of a table to build said diorama.

The unique texture of the skin looks good under its blue deco, and the beedy little eyes pop nicely.   Her gold hat and neck gear contrast nicely with the bright red outfit, making this a figure that stands out on a shelf against the mostly brown and green creatures from Attack of the Clones.   There aren't a lot of Shu Mai toys out there, so this one is likely as good as you'll ever get.  She's certainly good enough as a collectible, but as a toy there's not a heck of a lot to play with here.  She can stand, she can point, she can look good.  She's certainly good enough, and the fact we even got her is something of an accomplishment.

Collector's Notes: These sets got dumped like a pregnant girl on prom night (is that a saying? Can it be?) at Kay-Bee toys, bringing the prices down to $10 or so.  Each Geonosian War Room goes for about $5-$10 these days, so if you're in a position to get them both for $20-$25, do so.  You get 6 pretty good figures and a great table in there, and if you've got any taste you'll add in a Wat Tambor too.  That's a fun figure, and as a collection these figures do go nicely together.   Just remember, these are basically display pieces lacking in fun accessories.