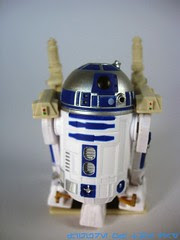 Commentary: There have been numerous versions of R2-D2, or "Artie Deetoo" as my boss' daughter once said, but this is the first one to be made from Droid Factory parts.   You can rip off his legs and head, or you can, you know, not do that.  The head swivels and the legs may be posed, with the third, central leg being fully removable if you're in to robot castration.  (Sicko.)

The design is a good one and the figure looks like R2-D2.  I mean, how could it not?  Even bad R2-D2 figures look like R2-D2.   This one I like a lot, because he has a big black central eye, the top panels on his head are all painted blue, and the little light under his eye is painted a color other than red for once.  I've got a lot of R2-D2 figures, so I'm happy to see one with different action features, accessories, or deco... and this one has all of those things.  This set is absolutely worth your while if you get a shot at it on the cheap.

Collector's Notes:  This item hit in very limited numbers in January before being all over the damn place around April.  And then it disappeared by July... I had to pick one up for my pal Daniel and they were pretty much gone by then.   You may be interested to know that this wasn't the only R2-D2 made of Droid Factory parts in 2012, you could also assemble one with some slightly different deco at Orlando's Disney Hollywood Studios as part of the Droid Factory scam thing.  If you want one now, it's either eBay or whatever place got a bunch of them after it was revealed more were waiting to come out somewhere.  I'm guessing.  I wrote this in September and am just spitballing at this point.