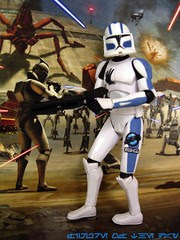 Bio:    CT-21-0408, nicknamed "Echo," as he was known for "echoing" the standard rules and procedures established for clones, was a clone trooper who served in the Grand Army of the Republic during the Clone Wars.   (Stolen from Wookieepedia.)

Commentary: I've got way too many clone trooper figures, and Clone Trooper Echo is technically the third release of just this figure.  Two different handprints were on the original armor (one for mass release, another as a Walmart-exclusive 2-pack with Cody) and this one is a big departure from that release with a much more ornate paint job.  I like this one a lot, and the "Defend Kamino" set should be tops on your wish list.  This time around the figure retains the removable helmet, and is built with ankle joints (which were out of fashion at the time of its release.)   With a nice tampo on his thigh reading "For Hevy," the popular trooper has some blue stripes on his armor and, of course, Rex' handprint from their adventures on an outpost with freakishly huge land eels.

If you like the deco here, you owe it to yourself to get this figure. As someone who has a few hundred clone figures, this is one of the designs that stands out as being nifty to me.  I dig it.  Go get one.

Collector's Notes:  This set was probably the best of the 2011 Battle Packs, which reduced the figure count per set to 3.  Clone Trooper Fives looked similar to Echo, and is cool too, but ARC Trooper Blitz is another solid reason to buy the set.  If you stumble on this one on the cheap, get it.  Even for $20-$25, it's going to be worth it in the long run.