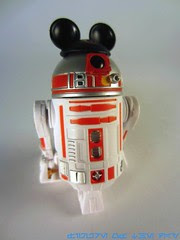 Commentary: The red and silver R2-Series Astromech Droid is basically an update of R2-M5, an exclusive from a few years ago.  There are some differences to the dome design, such as the colors being slightly brighter and, of course, it's based on the build-a-droid mold rather than the R4-G9 body.  This means you can swap parts with other build-a-droid astromechs to your heart's content, but that probably means futzing with it for a week before settling on whatever configuration you prefer.    I went with this one.

While not necessarily a wow-wee, gee-whiz figure, this deco isn't all that bad.  Red is nice, and it fits in a few displays depending on how you're setting up your figures.   His optional hat hole is what makes the figure interesting, as it lets him have a distinctive, souvenir look if you're so inclined.  My guess is the bulk of people buying these are making good use of the hats.

Collector's Notes:  A red redeco of R2-D2 isn't part of the main line, so if you missed the 2006 exclusive Astromech Packs this is a pretty good substitute.   Of course, you can also add this dome to the red body with white panels if you're so inclined too.  As things go, it's not bad.  It's not exciting either, but it is distinctive enough to be worth some recognition.