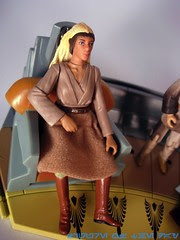 Commentary: While she has her fans, Adi Gallia hasn't had much love on the toy aisle.  After an iffy 1999 debut (I went through dozens to find non-wonky eyes), she got a retooled version in 2004 in this Jedi High Council set.  She lacks her outer robes, has no weapon, and is basically the same as the 1999 debut save for the added knee joints and a cloth "skirt" so she can sit.  It's a quickie, a limited-tooling option to fill out these packs in a hurry so you can finish your High Council diorama.  Given the lack of gear, the sets weren't much of a deal compared to basic figures in 2004.   She can stand, she can sit, and oh yes-- she can look incomplete.  9 points of articulation and no gear are bad enough, but to save a few more bucks, Hasbro opted to use this entire figure as Stass Allie for the same batch of exclusives.  They don't look all that much alike, but back then Hasbro was pretty adept at identifying and taking a shortcut.   This is a figure you track down for either the diorama pieces, or because you've gotta have them all.  The figure in and of itself was a bit of a dud in 2004, and today it really doesn't look any better.

I like Star Wars a lot, the action figures in particular, and 2004 was such a strange year in that we had some astonishingly good new sculpts (Saga J'Quille, Saga Admiral Ozzel, Vintage OTC Han Solo, OTC Dagobah Luke, OTC Yoda) and some unbelievably neat, well-priced items (Saga Wampa, Saga C-3PO with Escape Pod).  We also had some stuff that was just crap ("Is This Different?" OTC Bib Fortuna, most of the OTC Screen Scene figures, Vintage OTC C-3PO).   For better or worse, it makes 2004 one of the most interesting years to have gone through (and written about), but I guess you can't have the best of the best without some of the most boring of the boring, and Adi Gallia (and Stass Allie) make that cut.   Get the 1999 release, or cross your fingers for Hasbro to do another one some day.  Of course, since the last year where Phantom Menace will get a big push is now almost over, I wouldn't hold your breath.

Collector's Notes:  This set will probably cost you $30 on eBay today,  I would advise holding out for a cheaper price if you can.  Take that $30 and try getting some Glyos or Xevoz or SLUG Zombies or something instead.