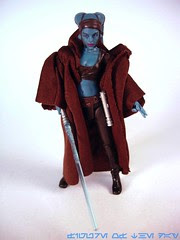 Commentary: Some figures were so good I couldn't fathom them being redone, like Aayla Secura.  The 2005 version was really nice, even though she lacked ball-jointed elbows she still looked fantastic and had a great range of movement.  This one's better.  The 2012 Vintage release has a hilt for her belt, 14 points of articulation, and a top-notch paint job.  The biggest surprise to me was the inclusion of lateral hip movement, so she can basically do the splits.  Her hands were sculpted to grip the lightsaber and to use the Force, and the overall level of quality in the sculpting and deco are sure to delight.  The cloth robes are a bit of overkill, but it's still nice to have.

Collector's Notes:  This figure, like the bulk of the 2012 line, was more than a little tough to find at mass market stores.   As such if you see her for a decent price, just buy it.  It's worth it.

Email ThisBlogThis!Share to TwitterShare to FacebookShare to Pinterest
Labels: Aayla Secura, Attack of the Clones, Jedi Knights, Revenge of the Sith, TVC, Twi'lek

Do the splits huh? I guess we all hoped she was flexible...