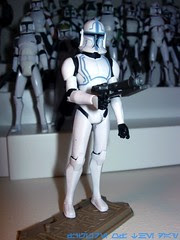 Bio: Clone troopers train for combat on the planet Kamino.  Kamino is not only the place where the clone troopers are engineered; it is also where they are trained in battle tactics, fighting techniques and explosives.  Seasoned clone troopers push the cadets hard to turn them into the toughest and most skilled fighters in the galaxy.  (Taken from the figure's packaging.)

Image: Adam Pawlus' risers, which I'm not sure if I'm feeling for this display.


Commentary: Sharing a name with a Stormtrooper from the future, Clone Trooper Hardcase was part of a disjointed Battle Packs figure set earlier this year.  While figures are usually joined thematically by scene or location, these three are basically just members of the same army.  Well, sort of.  I don't believe any of the three ever shared the screen, let alone appeared in the same episode or even story arc.  It's a stretch, but I can appreciate a good clone trooper repaint delivery mechanism.

Using the later "Stone" body, this Clone Trooper lacks ankle articulation and has a mere 12 joints for your movement and amusement.  He's much thinner than many of the other troopers, but the look is closer to what you saw on TV.  His blue markings go nicely with numerous other figures, of course you could just as easily skip the lot of them if you're done with clone repaints.

Collector's Notes:  This set was the hottest seller out of wave 1 of the 2012 Battle Packs, but eventually it started to hang around.  It was the only one of the initial wave to have any new figures in it, so I would suggest picking it up if you have the means and interest.