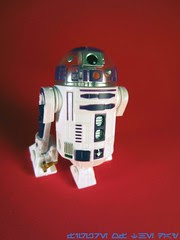 Commentary: With only one purple body, the R3-Series Astromech Droid purple dome really only makes sense on this frame.  Unless you're six and still have an imagination, I gotta color-coordinate these things or my head will explode.

With essentially the same layout as the clear red R3 dome, the purple one was more than a bit of a surprise given that we all know that Hasbro has made purple the official color of Mace Windu and Mace already has a droid.  Star Tours added three more to the mix, and I like it because unlike R3-M3 this one has a crystal-clear dome.  You can actually see all the junk on the body, which is slightly less cool than it sounds because unlike the regular Hasbro "Droid Factory" bodies, there's little extraneous deco here.  Those gears and guts are just silver on the Disney releases, but hey, at last the dome looks cool.  It's a different design from the traditional build-a-droid R3 head, as there's a hole in it for a hat, but it looks quite similar.  The paint job is nice and clean on the head, so I dig this one.

Collector's Notes:  This item was a customizable release at Disney Hollywood Studios in Orlando, and you can configure them any way you wish.  But really, this is the best way to do it right now.