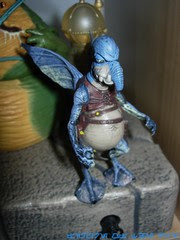 Bio: Watto sells used droids and mechanical parts in his shop on Tatooine. One of the droids for sale is R2-T0.  (Taken from the figure's packaging.)

Commentary: When I walked out of The Phantom Menace, I thought Watto and Sebulba were probably the best effects in the movie as digital characters went.  Watto had the added (dubious) benefit of being mildly controversial, I particularly enjoyed watching reactions pour in from around the world where each region had different opinions of just which race he was knocking.  I was also quite surprised to see him left out of the 2012 Phantom Menace merchandise completely, with no Hasbro products featuring the character.  Not even Fighter Pods.  It's a good thing Hasbro made their best-ever Watto in 2008 as a cheap Walmart exclusive with a swell Astromech droid.

This Watto, which legend has it was sculpted by Art Asylum (and the quality shows), began life as a 1999 release which was treated to a bluer, better redeco as part of the first Droid Factory packs.  He still sports his accessory on his belt, and his datapad, but the figure itself is the gem here.  The paint masks look closer to the movie, and this bulbous fellow has dirty skin and webbed feet. I daresay it's more realistic than the movie, he still has a lot of personality in his face and is packaged with one of Hasbro's best astromech droids.   If you only get one Watto, make it this one.  Even though he has five points of articulation and the legs don't do you much good, it's just a wonderful figure.

Collector's Notes:  This set (and this wave) had variable distribution in 2008, but I had no problems finding them around Los Angeles.   While some complained of unavailability, the price of all the C-3PX Droid Factory sets have remained quite low while the figures in these sets are inarguably more interesting than the 2009 Darktrooper Droid Factory sets.   If you're so inclined, I'd suggest getting the entire 2008 set, especially Watto with R2-T0.