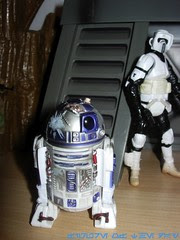 Commentary: I've got a lot to say about the Luke in this set, but today it's all about R2-D2.  The 2008 Droid Factory series of exclusives was a gift to fans of robots and weird repaints, as you could buy 13 figures for $60 and all of them save for one were, at the time, changed enough to be quite interesting.  R2 in particular brought us an amazingly detailed battle-damaged take on the figure, built on the R4-G9 mold with its retracting central leg activated by the dome twisting.   It looks spectacular.   The front of the figure looks distressed, panels are popped open, wires are exposed, and the light under his eye is dimmed signaling the fake-out of the droid's death from the end of the original film.  Cables, silver circuits, and plenty of grime are rubbed into his body while the legs are, aside from some dirt, pretty much the same as usual.  The back of the robot has bulging damaged panels and exposed wires as well, leading one to wonder just what kind of lovable genius sculpted (and also approved) such a depressing take on one of sci-fi cinema's most beloved plastic pals who's fun to be with.

The dome is also notable in that there are some serious scuffs, as well as more soot and blown-open panels.  This is a droid that looks like it was pulled out of a scrapyard, even the toy looks like it's seen better days.  It's really amazing, and to be honest I'm wondering if I missed this one in the archives.  It's so fantastic, you really ought to get one.  The price isn't too high, so you can if you're so inclined.  I know you've all got, what, something over 2 and something under 30 R2 figures by now, but go ahead and add this one to your stash.  And if Hasbro ever repaints the mold, get that too.

Collector's Notes:  This figure showed up with X-Wing Luke at Walmart for a mere $10 at first, and the duo (sans C-3PX part) were sold with a Toys R Us exclusive Death Star Trench Run boxed set (with an X-Wing, Darth Vader, and his TIE Fighter) late in 2011.  That R2-D2 was not significantly different than this one and for all intents and purposes, I'm classifying them as the same figure.   (The Vader from that set is just different enough to make you mad, though.)