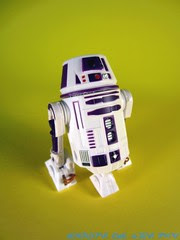 Commentary: Of the exclusive Disney domes, the R6 droid is the best.  It looks like it fell out of the late 1980s, and the purple panels do look quite nice on this one.  The trapezoidal head fits nicely (but not perfectly) on the droid body, and the colors do match quite well.  Detail feels a little soft here, but it's not like you'll notice.  The body has much crisper sculpting, but the paint distracts you from any rounded corners or softer lines.  Really, it's just a mass of white with purple bringing it to life, plus some nice red lights to break it up a bit.  The purple may be a smidgen too dark, as it obscures the round black eye in the center of its face.

If you can only get a couple of these droids, I'd put this one near the top of the list.  Distinctive and chipper, the R6 droid feels like it came out of a Star Wars sequel trilogy we'll sadly never see get made.

Collector's Notes:  This item was a customizable release at Disney Hollywood Studios in Orlando, and you can configure them any way you wish. This is the best configuration.  And yeah, we're looking at another purple astromech in the next FOTD too.

A Sequel Trilogy we'll never see made? It could still happen...

...in all seriousness I wrote a few of these a few months ago. Whoops! Didn't think any big announcements would be made before Toy Fair.