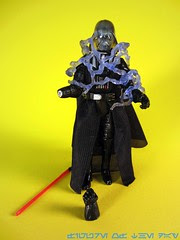 Commentary: Available on two different packages, Darth Vader brings back that ever-popular "Emperor's Wrath" look to pretty decent effect.  By recycling the 2005 Evolutions body which we're all sick of by now, the figure's newness comes from deco and accessories.  Oh, and a tweaked right arm.

This time around, the translucent helmet sports a skull inside which doesn't glow in the dark.  It's just there.   The figure is encased by blue Sith lightning boogers, which are relatively easy to get on and off despite the cape threading through them.  The lightsaber is nothing special, but the removable fist is interesting.  It's jointed and pops off at the wrist, revealing a painted stump underneath.  Vader's costume has black shoulder pads and some pretty vibrant silver on the chest, and this gives the figure a distinctive look compared to other takes on the mold.

With 14 points of articulation, this is not a bad figure.  Far from it, it's pretty neat but it's not what you would call versatile.  Given the "lightning" head, I don't know why they even include the blue energy snake things, at this point they might get a better figure by painting the lightning directly to the figure.  It's neat, but I would argue the late-2000 Power of the Jedi version is better because the head glows in the dark.

Collector's Notes:  Despite hitting in July, these figures didn't start showing up at retail until around September.  The assortment only has new figures, so it's pretty obvious if your store has/had any leftovers from the wave. This figure comes on a Return of the Jedi vintage cardback or a blue and black "Lost Line" look modeled after an abandoned, unused concept from the 1970s which frankly kind of sucks.