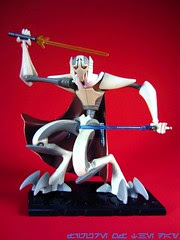 Commentary: While a smidgen awkward, General Grievous looks really cool as an animated figure.  Due to his evolving style, this version - the later, 3-pack release - looks more like the movie with its red-lined cape and warmer colors. The single-carded release looks cold, while this one looks like a cartooned-up version of the movie character.  I like this one a little more, even if the other one is arguably more interesting due to its overall weirdness.

The figure is a textbook definition of "action pose."  With his giant feet and complete lack of articulation below the waist, the photo is pretty much how he's going to look.  You can get a fair amount of motion out of his swivel waist, swivel shoulders, and ball-jointed neck, but it's still basically going to look pretty close.  The lines are simple and clean, with few extraneous details.  There are lightsabers on his belt, yellow eyes with a red organic lining, and a whole mess of armor under a cloth cape.  It's not easy to see in the picture but the action-packed cyborg is posed hunched over severely, giving him a lot of extra character that is pretty lacking in... well, frankly every other Grievous figure Hasbro has made.   While essentially a statue, it's neat.  I've got a shelf full of these animated guys and I love 'em, and if you're a Grievous fan (or know one) keep in mind that...

Collector's Notes: ...this figure, in all his styles, is close to worthless.  The 3-packs are worth significantly less than issue price and look pretty fantastic.  I get endless emails from fans going on how much they love that 2003-2005 animated Clone Wars cartoon, yet few bought the figures.  They're great.  Let's be honest, most of you aren't playing with these anyway, and they look fantastic.  You've got a desk at work, right?  Get some of these.  You won't be sorry, especially since they're significantly cheaper than the higher-end maquettes Gentle Giant put out.