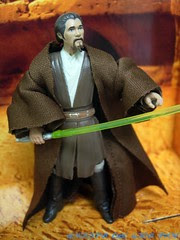 Image: Adam's arena backdrop.  Which I'm pretty sure I chucked.

Commentary: One of the neat things about the fact that this line simply refuses to die is that Hasbro will come up with figures I never asked for.  Sometimes, I'm delighted.  Others, confused.  Nicanas Tassu is more of the latter.   "Don't you want the guy who tosses Anakin and Obi-Wan their lightsaber?"  No, I don't care.   While I can appreciate a figure that seems he was designed from an extra who foreshadowed Nic Cage's Fu Manchu from Werewolf Women of the SS, I have a pretty limited interest in any human Jedi without a speaking role in the movies.   This figure is a Mace Windu redeco with a new head... and that Mace Windu mold does take the paint nicely, but his leg movement is pretty limited.  You get 14 points of articulation and it's still sort of tricky to get a decent pose out of him.  Well, it's not impossible, but it's a little wonky.

Most of my grousing comes from the fact that I don't care if this figure did or didn't get made.  Obviously, this isn't the benchmark of greatness, but Hasbro's decision to mold the head in brown and paint the face flesh is a little iffy as well.   The figure's face sculpt isn't bad, and he does have a fair amount of personality with those eyebrows, but I gotta say the figure pales in comparison to the excellent companion figure: a Count Dooku with a new head sculpt.  The set is still arguably worth the trouble of tracking down, but Nicanas is a snooze.

Collector's Notes: Despite being tough to find, the going rate of this set is about $10 these days.  The set was on sale during its window of availability in late 2010, which was bizarre.  After these guys quickly sold through, old stock (according to the date stamps) of the first wave of the Arena Battle showed up again and lingered.   $15 or so shipped is a pretty good deal.  Hey, at least it has an awesome Dooku in it.

I feel completely the opposite about this figure. It's a new figure without a lot of effort. There are tons of "background" figures that could be done this way. If I had more talent I'd kitbash or customize my own. Love your work, but you are always way more concerned about play value than I.

I feel completely the opposite about this figure. It's a new figure without a lot of effort. There are tons of "background" figures that could be done this way. If I had more talent I'd kitbash or customize my own. Love your work, but you are always way more concerned about play value than I.