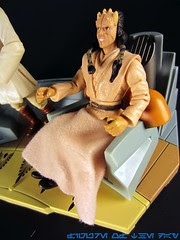 Commentary: There are few figures in this line that I felt were half-assed, and the Jedi High Council tops the list.   Hasbro has amazing sculptors and incredible engineers, all of whom I assume were busy when it got to be time to make Eeth Koth and the other figures in these sets.  The 2004 collection of Screen Scenes for Toys R Us are populated by barely-redecorated, accessory-free figures at higher-than-normal for the time prices.   Eeth Koth and Agen Kolar are in the sets, and it gets confusing.  Try and follow me here.  In 2001, Hasbro made a Power of the Jedi Eeth Koth figure.  It's not bad.  That entire figure was repackaged in this collection as Agen Kolar, but lacked the lightsaber.  That mold was retooled to make this figure, Eeth Koth, which has new arms and new legs.   In many respects, this figure has more going for it because the cloth skirt covers the awkwardly-posed legs, and the new arms drastically alter the original figure's personality.  I intended to dump on this figure, but in terms of sheer laziness, this figure is probably the least lazy in the entire collection.   That isn't high praise, but it's not like this is a subset worth of much adulation.

This figure's sole benefit to you as a collector is to sit in a chair.  The set includes said chair.  If you want an Eeth Koth with a chair, this is the figure to get-- otherwise the aforementioned Power of the Jedi release looks cooler and has a lightsaber.

Collector's Notes: When I got these sets, $19.99 seemed high given most single figures were $4.99 in those days.  Samples on eBay usually sell for about $30 boxed, and as a display piece which you buy, look at, and never touch, it's probably worth it.  But that's boring.  I realize I may be the only 30something collector going on about how so many of these action figures are so not fun, but geez, these things are kid's toys.  A lightsaber or something goes a long way.