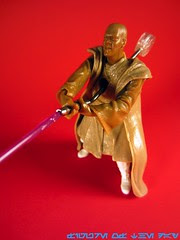 Bio: n/a (Taken from the figure's no packaging.)

Commentary: While going through my boxes to find figures as-of-yet-unreviewed-- which is a trial after the first thousand-- I stumbled on this Mace Windu prototype.  Damaged.  Decaying.  It's not even 10 years old and I never really got to enjoy it-- you might be able to tell, but the arms cracked at the shoulders and a chunk around his wrist is missing, because the arms were made of a very flexible material that, over time, stiffened and crumbled. I got this off eBay from a guy in China a while back because it had one major difference from the retail release-- a plastic, and not cloth, outer robe, which is how it looked in the promotional shots.  The sculpted garment was dumped prior to the 2003 release of the carded figure, but you can see it on the cardback of Mace Windu #0302.

A few test shots got out, some had Hasbro markings or missing parts.  Many had missing lightsaber blades, mine surprisingly included one.  Of course, I'm really depressed because a well taken-care-of figure had, in the span of  few years, started to crumble to pieces.  What was once a treasured collectible is now, basically, garbage in the making.  As of the time I wrote this, I realized I spent about 50% of my life writing about these action figures for you guys on the internet between my various newsletters and the discovery that an item I was excited about is in the process of going to pieces before I could even take the time for a good photo is beyond depressing.  So take care of your toys, kids, enjoy them while you can.

Collector's Notes:  Based on how the materials aged, I suggest you not buy this test shot should one come up for sale.   I have been able to track down my loose sample of the retail release version (with the cloth cloak) and its arms are still flexible and haven't crumbled or cracked yet. I'll be keeping a close eye on it over the next year, of course.  This is also why Hasbro discourages sales of prototypes-- obviously, what I have here isn't something Hasbro wanted to sell, I paid a premium for it off eBay China, and now it's falling apart.  I do not wish for my hobby to remind me of my own mortality.  That's what the mirror is for.