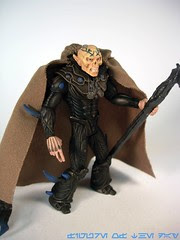 
Commentary: The fact that we ever got Nom Anor feels something like a miracle, as he was previewed in print ages ago as an upcoming Comic Pack figure and of course that whole thing went down the toilet.  To add insult to injury, Nom Anor was meant to be a late summer 2011 release, and it got bumped to 2012.  And of course, pretty much all 2012 figures are a little tricky to track down, so it really seems as if fate tried really, really hard to make sure you never got this figure.  And to be honest, if we didn't, I don't think I'd have minded too much.

A member of an extragalactic race, a true "other" in a story jam-packed with alien worlds, makes sense for a villain.  Everybody loves a common enemy, and this is one who debuted in the Crimson Empire II comic series and he was later retconned into a Yuuzhan Vong for the novels.  As a figure, he's pretty nasty.  I don't much care for the design in general, but the execution is probably an acceptable one.  It's less a "Hasbro did an iffy job" issue than it is a "I don't think I recognize this figure's right to exist" issue.  The deco on the head with freaky skin, pointy ears, nasty teeth, and tattoos on the head cap off a figure whose bulky form and wonky armor are in line (sort of) with the TLC Yuuzhan Vong figure release.   It looks sort of like an exterior muscle suit, without the bug- or creature-like qualities one may expect.  The cloth cloak is really tough to make look good on this figure, and you'll need to remove a slab of shoulder armor and spikes if you want him to be able to wear it.  A giant two-part staff requires your assembly as it's too large to fit in the vintage blister size, but it would've fit well in the comic pack packaging.

With 14 points of articulation and a fair amount of deco, this is a well-designed and engineered figure.  I just hate it.  After thousands of these dang things I usually can find something interesting to say about anything, even (and especially) stuff I don't like.  Red Darth Vader? I can spend days complaining about it, it's fun.  Nom Anor just kind of is.  It looks like a creature designed to menace Frodo and the Shire.   I love the Expanded Universe, but I would advise against tracking this one down if you're on the fence.  I admit it's just because I don't like it, the pose doesn't do much for me, the cloak hangs poorly, and dammit, it's ugly in a way I don't like.  Couldn't we have just got like a holographic figure again?  Seriously.  When is the last one of those we got, 2008?

Collector's Notes: Generally speaking Expanded Universe figures draw special attention and higher prices on the secondary market if they're the slightest bit hard to find.   This one is, on the whole, pretty cheap on eBay so I would say the market has spoken.  This figure sucks.  Next!

The Vong are one of the coolest aspects of recent EU in my opinion, but whenever they're given visual representation, they look either incredibly goofy or incredibly generic. We think alike apparently, as when I saw ol' Nom here in a store last week I thought he looked more like an orc than anything else.

Agreed. Great concept - dreadful execution. Wish they'd hired film concept artists to design the definitive Vong before they got turned over to comic book illustrators. The result is something awkward, unremarkable and goofy.

All the Vong figures are terrible. The design simply isn't Star Warsy.
I'd argue that the idea isn't either. The whole thing seems like something out of late 1990's Star Trek.
Hopefully Episode VII comes up with something better for the post ROTJ era than the EU did.

I was excited to get this figure. Admittedly the prototype looked much better with the sculpted hood, but I tweeked the cloth to make it sit right over his head and I really like it! He's also not a warrior, so his armor needn't look as aggressive as the other comic pack guy, which IMO looked a little more ridiculous. I got two of those by the way.

I can live with the idea of "Far Outsiders".. as for the war? Don't mention the war.