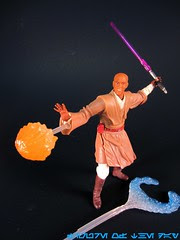 Bio:   A senior member of the Jedi Council, Mace Windu is a highly revered Jedi Master. He personally leads a battalion of Jedi to the red rock planet of Geonosis in an attempt to rescue Anakin, Obi-Wan, and Padmé.   (Taken from the figure's packaging.)

Commentary: I missed this one too?  In 2002 we went from having 2 pretty good figures of Samuel L. Jackson to having numerous Mace Windu toys, each of which tended to have an amusing head sculpt or nifty action feature.  This one packed in a bonus "victim" figure, which was a nice touch.  In 2002 Hasbro (and other companies) were tooting their horns about using real digital scanning as a tool in improving their toy sculpts, and with the 2002 line we did see a pretty good jump in sculpt quality.  Deco, though, lagged behind and things like plastic color or paint could suck the life right out of a face.   Thankfully, this one had an expressive face with good paint, and the fact that he's bald makes sure there's no wonky hair.  (We got a lot of wonky hair in 2002.)  His skin is a little light, but the plastic is just barely translucent enough in spots where you can shine a light and the ears tend to glow a bit.  It gives it a tiny air of realism that I'm not used to seeing.

The figure has a wonderful sculpt in an action pose with only 7 points of articulation, a necessary concession if you're going to cram in an action feature or two.   His right sleeve has a spring-loaded launcher inside, and you can shoot out force blasts in a yellow energy ball or blue hook form.  Neither appeared in the movie, but Hasbro was crazy for visual manifestations of the Force in 2002 and with energy being a big deal in the figures, it was something fans were getting used to.  Naturally, it pretty much vanished by the end of 2003.  His left hand has a magnet inside, which lets him hold on to his lightsaber in a different, and fun, way.  In many ways this figure, with its flexible skirt for sitting, is one of the best Mace Windu toys Hasbro ever made and has one of the finest sculpts.  He's not loaded with articulation, but asymmetrical sleeves and a great pose make this figure far more interesting to look at and play with than his descendants.

Collector's Notes:  This figure started with a tan Battle Droid partner, but later his package (and the figure itself) would be changed to a more movie-accurate red color.   In my hunts, the tan one was far more common and I had to track the red one down on eBay several years later.  Red ones were a bit of a pain to track down, but I got it cheap.  The tan bonus droid version is only worth about a buck, and like the Dagobah Vader I looked at last week it's totally worth snagging for five bucks or less.  Even in 2002, I felt like I got my money's worth at ten bucks.