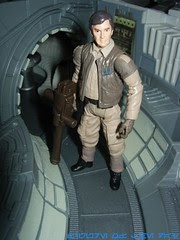 Commentary: While this is the first figure named Colonel Cracken, a nameless Rebel Trooper from 2006 was modeled on the same basic character.  I really don't get why Hasbro saw it necessary to do a new version of the character, but I won't deny it's a nice figure.  The vest is now sculpted as part of the torso, which eliminates bulk and improves articulation.  The head sculpt is better, but it lacks the communications equipment which made the 2006 version so distinctive.  Both have pretty much the same legs.   Just one look at the new Cracken lets you know it's an improved release, but it does lack the charm, and helmet, of the original.

With a good sculpt and improved deco, his 14 points of articulation make him a good member of the Millennium Falcon's crew.  He includes a more-or-less standard laser pistol, plus a giant gun for reasons not totally known just yet.  It looks like it should be designed to plug in to the big 2008 Millennium Falcon, but as far as I know nobody has actually discovered why this giant gun has a huge peg on it.   It's a decent accessory, but its presence over, say, an alternate head with a headset is unknown.  If you're looking for the best Cracken money can buy, I'd say it's a toss-up.   Be sure to look at both versions because while this one has the best-overall sculpt, the original has a little more personality and more entertaining accessories.

Collector's Notes: This wave made the rounds in February and March, selling through quickly, and for many fans was the last time they saw new Vintage figures on the pegs.  You may still be able to find one online or at your local comic book shop, but for the time being it does not look like it will get improved distribution at big box stores.

Adam, isn't that giant gun the same thing one of Jabba's troops is seen attaching to the rail of either the skiff or the sail barge earlier in ROTJ? In which case is the peg for a later use of the weapon with a Jabba's palace figure to plug into a new Skiff?

The accessory is the fire extinguisher Cracker used during a deleted scene on the Falcon in ROTJ.