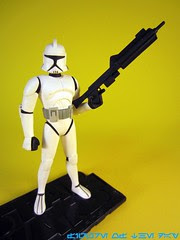 Commentary: You might be under the impression that there are too many Clone Trooper figures, and you'd be right.  This mold alone-- being an obscure one-- has three repaints plus two remolds for a grand total of 6 figures with this basic body template.  The funny thing, I could stand to buy more if the existed.  The plain white Clone debuted as a Target exclusive in late 2004 before rolling out to other stores later.  He is limited in articulation, with a mere 3 joints. The shoulders and neck move, and that's it.  With his bent arm and pointed figure, you can still squeeze some cool poses out of the simple, if elegant, design.  It's super-white and the deco is great-- there's room for improvement, as more panel lines could have really brought out even more detail.  The belt is a little darker than the character art model, but hey-- it's still cool.  The price is right, and for those of you seeking subcategories to collect in their entirety, the 2004-ish animated figures may be the perfect place to go.  I mean, they even filled in lines on their boots!  That's nothing to sneeze at.

Collector's Notes:  It's cheap on eBay.  The recolors in red, yellow, and blue are much tougher to find and received wonky distribution compared to the other figures in this line... I have yet to open mine, as I got them  before a move, and they're in a box somewhere.  Hopefully I'll find them soon!