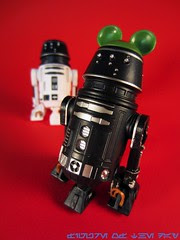 Commentary: The Black R5-Series Astromech Droid is an odd duck because it is, on some levels, non-essential.  The two builds here make the most sense with the bodies available, but they vaguely resemble R5-J2 and R5-M2.  Much like the Red R5, the Black R5 is different enough from those two figures where completists will have a good reason to build one (or both) while others probably threw up their arms in nerd rage long ago.  The other droids are more striking, but you're going to need more droids.  You just are.  Admit it, you also have a problem just like I do.

The dome itself is very similar to R5-J2's, minus the bad motivator and removable antenna.  It's black, it has a silver stripe, and it has silver markings on the dome.   It also has orange slices on the top of the dome.   I don't know why they didn't just go with silver, to keep it consistent, but it still looks pretty good on either the black-and-silver or the white-and-black bodies. The body in the foreground of this image is very similar to R4-I9, making the builds at the Droid Factory a decent mishmash of parts we've seen before.   I don't particularly find this dome exciting as we've got figures very much like it, but I'll never turn down a customizable figure kit thing.  Well, rarely.  I've got a closet packed with Xevoz and Glyos and Outer Space Men I can't stop futzing around with, so seeing this sort of thing in Star Wars remains fun... but I wish it were wackier colors.  Let's get some neon yellow up in here.

Collector's Notes:  This item was a customizable release at Disney Hollywood Studios in Orlando, and you can configure them any way you wish. Depending on your build preferences, this might be one you can skip if you're on a budget.  (Go for the R6 first!)