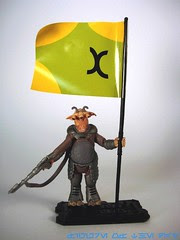 Bio:   Mawhonic is a Podracer in the Boonta Eve Classic Podrace.  He arrives on Tatooine with dreams of glory, but loses control of his Podracer and crashes in the Mushroom Mesa stretch after fellow Podracer Sebulba deliberately rams into him.  (Taken from the figure's packaging.)

Commentary: Hasbro announced Mawhonic would be coming on a vintage package way back in 2011, and it's still on the way!  Here's the surprise: the vintage version will lack the flag that came with the Walmart Exclusive version, so loose figure collectors will probably want to chase down the first release to get that accessory.  And packaged collectors, well, we know where your bread is buttered.

As Mawhonic was never seen next to a full-size character, most fans didn't realize he was roughly the same size as little Anakin and Sebulba before his figure made the rounds at retail.  Being a practical effect in the movie, Mawhonic had the advantage of being completed unlike many of his other Podrace cohorts, many of whom exist as a naked maquette.   The tiny figure replicates his movie look quite nicely, sporting 14 points of articulation and some pretty amazing deco.  While his torso doesn't have a lot going on, Hasbro gave him little spots visible on the back of his feet as well as a head covered in veins and spots only visible from the sides or the back.   Most figures look best from the front, but you can really see where the development dollars in Mawhonic went once you pick him up.

While the figure's articulation is smooth, his sculpt is exceptional, and his deco is stupendous, I didn't spend a lot of time with this figure.  He got opened, photographed, and shelved.  It's not a bad action figure, but Podracers are hard to find homes for as their vehicles will likely never see production.  Fans who love all things Gran or anyone looking for a short Ree-Yees substitute will find lots to like in this little guy.  It's rare that Hasbro can make a short figure cost $9 and make it seem worth it, but the amount of effort on this one is pretty apparent once you see him in person.  Get one if you can, unless you're looking to cut costs, in which case wait for the inevitable (I hope) Ree-Yees resculpt around 2016.  I'm guessing.  Who knows?

Collector's Notes: While Phantom Meance-themed anything isn't high on most fan wish lists, this is actually a really excellent figure and it's sort of good to see Hasbro trying to reissue it.  He's in the final (for now) online exclusive vintage assortment and if you're really lucky, a Walmart near you might have him in his 3D glasses-bedecked packaging still. Remember, the Vintage one won't have the flag.  Have you ever been sorry you bought an alien figure you didn't already own?  Probably not.  So go get this one.