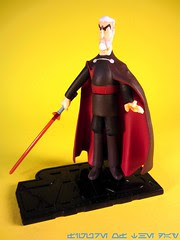 Commentary: There's something delightful about Count Dooku, beyond the fact that "dropping a Count Dooku" was synonymous with taking a dump on one of my favorite TV shows, Venture Bros.   This figure is based on the early cartoons and makes a decent display piece-- like his siblings, it's basically a nicely-painted, semi-articulated statue.  On many levels, I think this direction would be a good way to go for this and other collector-driven lines as it emphasizes pose and sculpt over broken promises of playability.  (16 points of articulation doesn't guarantee he can still stand or hold his gun!)  This figure can swing is lightsaber, twist his neck and waist... and not much else.   Given the cheaper figures of his day, the slightly higher price point was tough to swallow at first but if there's one thing I've learned, time is good at correcting the "value" of things.   Despite the high-quality of this figure, made of stiff plastic with a great display stand, it's really cheap on eBay.  Never mind the fact he stands well, or looks good, or is part of a really excellent but small sub-line.  Ah well!  If you've got the scratch, this is worth getting.

Collector's Notes:  Samples on eBay-- loose or carded-- go for as little as $1-$2.  Lots of this line are priced similarly.  Unless you're a cheapskate or a terrible online toy shopper, you can afford this one and probably the entire line for a fraction of what it will cost you to buy a typical Vintage wave these days.