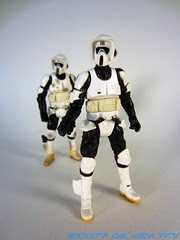 Bio: Biker scouts patrol Endor on speeder bikes.  The scouts look for Rebel incursions as they navigate swiftly through the dense forests.  To provide the scouts with heavy-duty firepower, some bikes have blaster cannons that can be removed to create free-standing weapon emplacements.  (Taken from the figure's packaging.)

Commentary: The Scout Trooper in this set is, without question, the best-ever Biker Scout to ever sit on a Speeder Bike.  It's essentially a 2006 Vintage Collection release, given some new deco and tooling.  The head, neck, torso, and upper-legs are clearly new tooling, and the deco is pretty different from previous releases.  I daresay the deco is a step down while the sculpting is a step up, so we are at a point where there's no true definitive best Scout Trooper, but as long-term readers have no doubt surmised, I find the entire notion of an "ultimate figure" to be destructive as there will always be room for improvement and new techniques to eventually render that awesome figure you just overpaid for as a junk drawer refugee.  The figure itself has excellent articulation with ball-jointed hips which rotate just right to allow the figure to stand with only a hint of bow-leggedness, and he has no problems whatsoever when it comes to sitting.   He leans forward just right, his knees band just perfectly, and his head has this nifty construction with a peg between the head and the torso which gives the figure a greater range of movement just perfect for biking.  The arms are pretty much the same, minus the fact the deco has taken a step down.  The articulation rings in the shoulders and ankles are now black, rather than white, so they don't blend in very well at all.

Another point where the deco is different is the helmet.  Before, the "mouth" was grey with a black border.  Now it's black, no border.  The straps round the waist were small and grey, now they're larger and black.   There are other minor details which you won't notice unless you put them side by side, but I will say the helmet deco is pretty different immediately.  Given the figure's main purpose is to ride a bike, this is not a huge loss but for $22, I'd love to see it perfect.  Of course, high expectations lead to disappointment.

The bike itself is quite good, with lots of optional parts like a kickstand, a tri-pod cannon which provides extra firepower (I love seeing this on vehicles), plus a two-part clear stand.  I appreciate finally seeing a vehicle stand, and correct me if I'm wrong but this may be the first 3 3/4-inch vehicle stand out of Hasbro.  It's a base and an arm, but the arm is a plus shape which fits in the back... just a little awkwardly.  The stand also raises the vehicle off the ground quite high, which is awesome for displays but awful for dioramas.  The bikes were never 6 feet off the ground, I don't think.   So in short, the figure's good and looks pretty good, but don't throw out your existing Scout Troopers just yet.  The bike is a huge improvement and the snap-on cannon is tons of bonus fun.  Hasbro made sure to put in everything you could possibly want short of a storage compartment for the bonus second blaster, so while it may not be immediately obvious you do get a good bang for your buck here.

Collector's Notes:  This item hit in September and the first shipment sold quickly, because it didn't suck and coordinated nicely with a BOGO 75% off sale.   More should be en route and I have no doubt Hasbro will rerelease this mold in new packaging one or more times between now and when the line becomes unprofitable.  I saw a bunch of it at lunch today, so odds are you can find it if you make a couple of stops.

Email ThisBlogThis!Share to TwitterShare to FacebookShare to Pinterest
Labels: DTF, Empire, Exclusive, Return of the Jedi

I disagree about the sculpting. It's good, but I think the Vintage Collection Scout Trooper is superior ing paint AND sculpt. The new one is awkward. And I am not a fan of ball jointed hips. At least not the way Hasbro does them, where you have to twist them just to get forward movement. Thier first figure with ball jointed hips, AT-TE Tank Gunner, had hips that worked great. (though the rest of the figure sucked). I wish they could keep doing them like that. Anyway, the Vintage Collection fits on the bike fine. Maybe even better than the figure that the bike came with. No ball jointed hips needed. And I just can't excuse those god-awful black shoulder and ankle hinges.