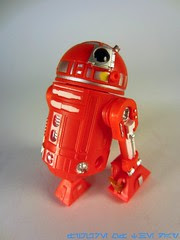 Commentary: The Red R2-Series Astromech Droid is pretty slick.   The coloring is very different from other red figures to the point where some people insist it's orange.  I guess it's probably somewhere nicely in the middle.   Of the first year's batch of parts, this is the only R2-series dome to be molded in red, all of the others are basically painted silver.  This one stands out a bit.   With a matching body, it looks more like what someone in the late 1980s or early 1990s would color a droid into, which is really cool.  A bright yellow light under his big black eye gives the figure some added color, the silver and white basically look alike but break up the endless sea of bright red nicely.  The figure has the same basic articulation as all the rest, and of course costs more.

This one stands out quite a bit on the shelf due to his electric colors and uniquely hued dome.  While the figure is essentially a redeco, it's a good one and even though there are other red astromechs out there, I guarantee you they aren't this brightly colored!

Collector's Notes:  This item was a customizable release at Disney Hollywood Studios in Orlando, and you can configure them any way you wish.  I liked the red dome with the red body, but hey, maybe you want the white body with red markings?