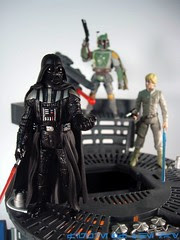 Commentary: I really like this Darth Vader and this entire Battle Pack, available in stores now.  The 2012 line of Battle Packs basically came out stillborn, with wave 1 faceplanting at retail and being purged from Walmart pretty quickly.  This one showed up online in April 2012, but didn't start hitting Target stores until June or July of this year.   The set features brand-new figure sculpts with limited articulation, which seems to make most fans' heads explode.  Which, of course, makes me love them even more.  Spite ist Spiel.

Darth Vader got an all-new sculpt, and that's pretty cool because it has been a while since Hasbro made a 100%-new Darth Vader from Episode V.  The silver armor may not be a perfect fit to the movie, but it looks damned good.  The detailing on the plastic capes-- now something of a novelty-- is fantastic, and the flowing robes look great and fit well.   Their only real flaw is that they get in the way of posing the figure.  He can stand, but he's not going to sit.  As a desk accessory or display piece, this may be my new favorite Darth Vader.  I like it even more than the light-up lightsaber version, or the ball-jointed hip Star Wars Vintage release this year.  It stands well, it doesn't require a lot of fussing, and he holds his lightsaber just fine while extending a menacing hand out at Luke.   A figure posed like this is really interesting to me because the figure itself has some additional personality carved right into the design, rather than relying on the range of movement combined with finding the "sweet spot" that allows a super-articulated figure to stay upright.  It just stands.  It just works.  I love it.

Collector's Notes:  Given his delayed availability and groans at Toy Fair, it's slowly but surely starting to wind up (and hang out at) the big box stores.  I won't say it's an essential purchase, but if you have a soft spot in your heart for old-school, 5-joint figures or just want to see what Hasbro's potentially best Darth Vader sculpt of all time looks like, go ahead and get this one.