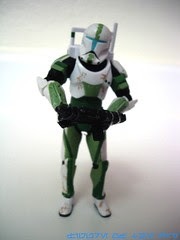 Commentary: Green!  Republic Commando Fixer takes a retooled body and gives it a new shine.  The coloring is a little better than the original, although the simulated weathering isn't all that hot.  It still looks good, and things like jointed ankles and knees are new to this, the second version of the figure.   The sculpt is crisp and he feels a little less chunky than the original, which no doubt comes in part from an evolution in video game aesthetics as Fixer now looks a little less like the bulky Master Chief of Halo fame which seemed to be a popular standard in the early 2000s.

With a blaster and backpack, this is an improved figure and arguably the best version of the character we'll ever see on a toy shelf.  I can't imagine Hasbro will go back for thirds with these guys, unless they update him for the animated Clone Wars series to hang out with Boss at some point.   (And let's face it, unless Hasbro knifes The Clone Wars it'll happen sooner or later.)

Collector's Notes:  While commanding a decent price on the secondary market, I still see these in Toys R Us stores as recently as this month.  It can be had if you are lucky and hunt, and if history is any indication you should get it before it starts ascending to that annoyingly high price point like The Saga Collection Delta Squad set.

Whats with the "click here to read the article" thing? Annoying.